Book: A Trail So Lonesome 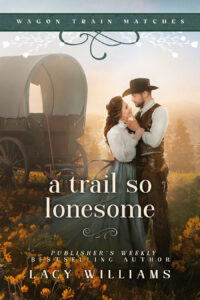 Spending five months eating trail dust wasn’t Leo Spencer’s first choice. Or his second. He’s not one to run away, but some situations can’t be fixed and his family—two brothers and a sister—needs to start over. Which is how he finds himself on a westbound wagon train.

Evangeline has a secret, one that has sent her on a journey across the plains on the Oregon Trail. When her father is badly hurt and she needs help, Leo is there. A deal is struck and the two unlikely friends form an alliance… that leads to more.

But Evangeline’s secret looms over her… and Leo’s family troubles are far from over.

Two days ago, a little boy had been bitten by a snake while walking alongside his mother. Leo had heard about it sitting around the fire eating supper.

“No one. When Father liquidated—”

How had Evangeline and her father kept a secret this big?

Two thousand dollars. That much money would allow him to get Alice and Coop and Collin settled. He could buy them a castle with that kind of money. He’d planned to help them build a house, put in a garden, raise cattle. He’d known it was going to take years.

But with this kind of money, Collin and Coop could start a business. Alice could have a nice house, built to her specifications.

There had to be a catch.

“A lot of things can happen on the trail. More river crossings. Buffalo stampede. Sickness. What if —” What if James didn’t survive the injuries he’d sustained today? Leo couldn’t say the words.

She did. “What if we don’t make it to Oregon?” Her voice was quiet, pensive. “If you put in all the effort, I won’t hold it against you if there is a natural disaster or we get cholera. You’ll still be paid.” 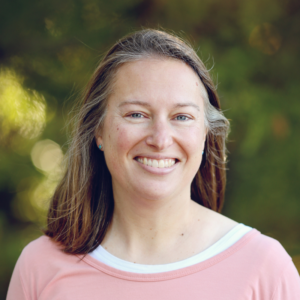 Lacy Williams wishes her writing career was more like what you see in Hallmark movies: dreamy brainstorming from a French chateau or a few minutes at the computer in a million-dollar New York City penthouse. In reality, she’s up before the sun, putting words on the page before her kids wake up for the day. Those early-morning and late-night writing sessions add up, and Lacy has published sixty books in a decade, first with a big five publisher and then as an indie author. When she needs to refill the well, you can find Lacy birdwatching, gardening, biking with the kiddos, or walking the dog. Find tons of bonus scenes and reader extras by becoming a VIP reader at www.lacywilliams.net/vip .