Book: Beautiful In His Sight 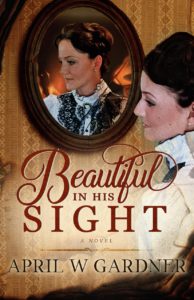 It’s 1917, and Halifax is at war. Silas Quinn, street sweeper and army reject, remains on the home front, shunning God and society as religiously as they shun him. But the night he stumbles across a half-frozen prostitute, his eyes blink open, and his greater purpose is born: preserve and protect.

There’d been a day when shop girl Helen Fraser was desperate enough to believe a few nights in a brothel would cure her troubles. By some miracle, Major Jack Gordon deemed her worth saving, but Helen knows her meticulously recreated identity cannot last. What she doesn’t expect is for its destruction to come about, not by an old john or one of the madam’s goons, but by a force great enough to flatten a city and bury her alive.

Set against the backdrop of the Halifax Explosion, Beautiful in His Sight is a Christian historical romance that explores unequivocal grace and identity in Christ.

“Today, the Voice of the Holy Christ, compelling and painfully tender, drowned it all in the well of His shed blood, leaving only the reminder of a ceaseless love.”
This is the first book by April Gardner that I have read and it is indeed a very interesting and fascinating book centered around Halifax, Nova Scotia explosion in 1917. In the midst of WWI, Helen, a broken woman with a past, tries her best to build a new life with innate compassion, tenderness, love, and generosity. Silas, an immigrant from Ireland, also has a broken past and a heap of guilt which have him sweeping the streets and living like a beggar when he’s a skilled woodworker. Silas is faithful, loyal, compassionate, determined, and extremely kind. The story starts out the day of the explosion and then backtracks to when Silas and Helen first meet and then returns to the day of the explosion and moves forward. Silas’ faithful and unwavering love for Helen is so beautiful and touching; his faithful and humble following of his Lord’s leading is inspiring. Silas is an unlikely hero, but a real hero he is.
The themes of forgiveness, redemption, and true and abiding love are woven so intimately throughout the plot and are quite uplifting. The story, though, moved slowly for my taste and the book felt a bit long. Though it didn’t completely resonate with me, you may enjoy this historical fiction as so many other Christian fiction readers and bloggers have.
I received a copy of the book via Celebrate Lit Tours and was under no obligation to post a positive review. All comments and opinions are solely my own. 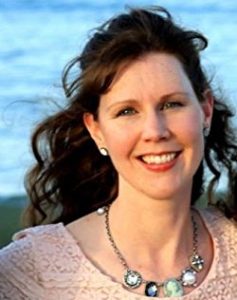 APRIL W GARDNER writes history with a Christian perspective and a little imagination. She is a copyeditor, military wife, and homeschooling mother of two who lives in Texas. She writes Christian historical romance with a focus on our Southeastern Native Tribes. In no particular order, April dreams of owning a horse, learning a third language, and visiting all the national parks.

April loves to hear from her readers at: aprilgardnerwrites@gmail.com

The Story Behind the Story

My novels are never purely fiction. They are stories constructed around truth, around some segment of the past that’s both stunning and stunningly forgotten. My latest novel, Beautiful in His Sight, is set during the Halifax Explosion, a WW1 event little known in most of the world. For those in Halifax, Nova Scotia, in December of 1917, it literally shattered their world.

That’s the setting we find my characters Silas and Helen struggling to survive, but—as in every good romance—love (and God’s grace!) brings them through.

The Story Behind the Setting

By December 1917, Halifax had passed tens of thousands of soldiers and sailors through its railyard and onto the naval vessels in its harbor. With the military came the prostitutes who migrated in droves to the slums. It’s reported that some days, the only passengers disembarking from the trains were women in short skirts. Slumdom’s seams overflowed with carnality, public drunkenness, and solicitations. Prostitution wasn’t the only job to be had for women. With so many men wearing army green, ladies of the proper class and training stepped behind registers and bookkeeping desks and kept Halifax running.

This is the world in which we find our female lead, Helen Fraser, a reformed prostitute desperately trying to start over as a salesclerk.

The Story Behind the Explosion

As Silas, the story’s male lead, puts it, the explosion was “a tragic accident, a miscommunication between passing ships.” In short, it was a dozen small decisions that accumulated to one very horrific event. The collision and blast released the equivalent energy of 2.9 kilotons of TNT and instantly obliterated everything within a half-mile radius. The munitions vessel that exploded, the Mont Blanc, rained iron shrapnel all over Halifax. Its 1,160-ton anchor landed 2.5 miles away where it can still be found today.

The Story Behind the Name

The name Helen Fraser (female lead) is an honoring nod to Helen Clark, a courageous young woman who survived the explosion. This is her story.

Helen Clark, age eight, was beginning her school day at St. Joseph’s when she felt something disturbing. “Like thunder was taking place alongside of you,” she later said, “instead of up in the sky.” She looked to the window and gaped at the glass bowing inward. She flung her arms over her face and ducked an instant before it blew in. Then, in her words, “The ceiling above gave way at one corner and down two sides of the room, hanging like the flap of a great envelope and spilling out children from the room above.”

A nun grabbed her arm and said, “My heavenly God, the Germans have arrived! Get down on your knees girls.” In lieu of prayer, Helen wrenched away and jumped out the second-story window, narrowly missing the debris that, in the next moment, struck and killed the nun. A snow mound broke Helen’s fall. Suddenly very tired, she laid down right there, feeling no cold or pain, and went to sleep.

Eventually, two men approached to see if she was dead. Though she couldn’t speak, she managed to get to her feet. They straightened the bow on the top of her head and told her to go home if she had one to go to. The blood crusted over her eyes limited her vision, but she shambled along best she could, recognizing nothing. She knew her street only by the change to cobblestones under her feet, and her grandmother recognized her only by the bow in her hair.

Quick-thinking and bold, little Helen avoided both death and blindness, and I’m honored to name my heroine after her.

Reading Is My SuperPower, September 12

For Him and My Family, September 15

Through the Fire Blogs, September 20

To celebrate her tour, April is giving away a grand prize package of a $25 Starbucks gift card and a signed copy of her book!!

3 thoughts on “Beautiful in His Sight Review and Giveaway”