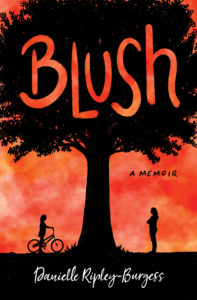 NOBODY SAID growing up is easy. For Danielle, the safe suburbs of Kansas City always felt warm. Inviting. But one day, everything changed. Not only did she hate what puberty was doing to her body, she had spotted a few scary specks of blood after going number two. Gross. As an insecure tween who blushed during “the talk,” one who refused to buy toilet paper at the store, nobody could know her little secret. So she hid it from everyone—Mom, Dad, her brother, and her friends. This went on … for years.

Busted. Eventually, her secret came out. Danielle was rushed to the doctor and into a colonoscopy. Shock took over when she was diagnosed with a rare colon cancer (something the internet called an “old man’s disease”) just a few weeks after her seventeenth birthday. Seriously!?

High school mornings in classrooms morphed into nightmare days in cancer-center waiting rooms. Yet Danielle stayed hopeful, even grateful, for her illness. The way she saw it, fighting cancer spiced up her otherwise-boring testimony. And it brought her true love. Not until she heard the dreaded “It’s cancer” again at age twenty-five did she start to resent so much suffering and question her faith. Yet Danielle wasn’t about to stop. From Times Square to the White House, she became an outspoken survivor by starting a blog, as well as a young wife and a mom. Eventually, she found the self-acceptance she’d been looking for—it was guided by a still, small voice that had been with her all along.

In this soul-baring memoir, Blush: How I Barely Survived 17, Danielle reminds us that growing up is never easy, and she shows us how to go head to head with God. With out-of-body wisdom beyond its years, Blush beautifully inspires us to accept our imperfections and embrace every season of life. 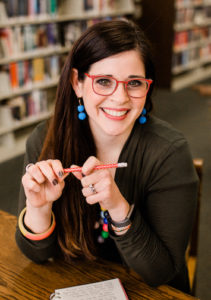 Danielle Ripley-Burgess is a two-time colon cancer survivor first diagnosed at age seventeen and an award-winning communications professional. She writes and speaks to encourage those facing trials, under a motto of “faith that survives.” She’s the author of Blush: How I Barely Survived 17 (Redemption Press, 2020), The Holiday Girls (Little Lights Studio, 2018), and Unexpected: 25 Advent Devotionals. Her story has been told around the world through outlets like The Today Show, BBC’s World Have Your Say, Sirius Radio’s Doctor Radio, the Chicago Tribune, the Huffington Post, among others. Home is in Kansas City with her husband, Mike, and daughter, Mae. When she’s not writing, she can be found baking her favorite chocolate chip cookie recipe. It’s a good one. Follow her blog at DanielleRipleyBurgess.com or connect on social media at @DanielleisB.

I walked into the classroom, hung my backpack on a designated hook and glanced at the chalkboard as I took my seat. Sigh. It was spelling bee day. I’d dreaded it for weeks.

Most people probably didn’t realize I loathed the spelling bee, especially my teacher. As a book-loving student who aced nearly all English exams, anyone could have rightly assumed I would be jazzed about the competition. I was a great candidate to represent our class. But there was one little problem: it sounded like a nightmare. I wanted nothing to do with it. The idea of the whole school looking at me on stage—the chance of people noticing the zits on my face, seeing a bra underneath my shirt, or calling me a nerd because I was a strong speller—sounded awful. No thanks.

A buzzer echoing throughout the hallways kicked off our school day. My teacher, dressed in a popular floral dress from the 1990s, walked to the chalkboard to take control of our classroom. The pledge of allegiance, math worksheets and recess distracted me from the schedule until the dreaded hour came.

“Everyone please stand up, push in your chairs and join the circle,” my teacher insisted as she waved her hands to gather us. It was time.

Fortunately, I had a plan: I was going to cheat.

If my spelling test grades were any indicator, I had a good chance of making the spelling bee. So, I decided to purposely spell my word wrong. I would use a wrong vowel toward the end of the word and pause to hear, “I’m sorry but that’s incorrect.”

Let’s just say my plan worked like a charm. Relief flooded my chest when I was asked to sit down and join the others who were knocked out of the competition. A few weeks later during the school-wide spelling bee, I deeply exhaled and smiled widely as I watched my classmates compete on stage from the gymnasium floor. I was so glad it was them and not me.

Today, 25 years later, this memory is both a victory and a tragedy. I can’t help but see my younger self, a tween girl who felt embarrassed about her body, and feel proud of her for identifying what she did and didn’t want. That moment in fifth grade helped her find her voice. Yet her empowerment came at a high cost.

Convinced that hiding her true self—her body, her smarts and her opinions—was the only way, this thinking led to her nearly losing her life. If I could go back and chat with her today, I’d affirm her fears yet encourage her to see God gave her the smarts—being a strong speller and a good writer is a gift and not a bad thing. I’d challenge her to accept herself and say that dominating the school-wide spelling bee could actually be a great thing.

Blush is a memoir that tells many other stories like my fifth grade spelling bee. The book is dedicated to my daughter, who is just now becoming a tween. As I’ve relived my life by writing this book, I’ve not only found nuggets of truth to pass on to her as she navigates adolescence, but also confidence and redemption in my story.

Many of us have believed the lie that to be accepted, we must hide. I wrote Blush not only for my daughter, but for anyone looking for inspiration and hope. It’s a book especially for those who are ready to finally face their insecurities and consider how to stop sitting it out and instead take the stage.

Danielle Ripley-Burgess is a two-time colon cancer survivor first diagnosed at age 17, an award-winning communications professional and author of Blush: How I barely survived 17. Follow her blog at DanielleRipleyBurgess.com or connect on social media at @Danielleis

What does success as an author look like to you?

I used to think author success meant signing a traditional publishing contract that got my book into big box stores, or at least becoming a top seller and having agents approach me. And while that still sounds like an author’s dream, it’s not quite how I’d define success.

I think about all the writers who literally wrote the letters and stories that became the Bible. These people, most who are nameless to us, used their gift of words and language to share what was said or heard about God, and now we can hold a book called Scripture and experience life change. That’s what I’d call ultimate author success.

Which chapter was the most difficult to write?

In the middle of Blush, there’s a chapter called Shackles that talks about some of the hardest days when I first faced cancer as a teen. I explain my heartbreak over lost friendships, the anger at arrogant doctors, the violations I felt after repeated medical exams and the desire to return to “normal” life. Not only was that chapter difficult to actually live through, but it was tough to revisit and write down.

What would you like your readers to get out of this book?

When I first went public with my story, it was to help others know that young people like me can get colorectal cancer and to inspire other teen girls struggling with embarrassment to not hide their bodies. Over the last 20 years, I have realized my message is even bigger. Blush is ultimately a story of hope. I want all readers to be inspired to embrace hard conversations. To be honest with themselves and others. And, to keep the faith and listen for God’s still, small voice in their lives.

What is your most well-loved and well-used house appliance?

My red Kitchen Aid mixer that has been known to bake some of the best chocolate chip cookies in the whole world.

I write memoir, which does feel like a calling from the Lord because 1) it’s tough to strike the right balance on what to make public versus keep private and 2) many publishers discourage people, especially people like me under age 40, to write memoir. But, I enjoy reading memoirs and I hope I’m not alone. I’ve also watched memoirs penned by young females become powerful prose that is culture-shifting. Biographies have always gripped me, I love real, authentic human stories. It’s out of obedience and joy that I share mine.

Thank you, Danielle, for allowing us to get to know you better!

For Him and My Family, August 24

Because I said so — and other adventures in Parenting, August 31

Lights in a Dark World, September 3

To celebrate her tour, Danielle is giving away the grand prize package of Danielle’s favorite local coffee, Betty’s Recipe from the Roasterie in Kansas City & a signed copy of the book!! (here’s a link to the coffee: https://theroasterie.com/product/bettys-recipe/)