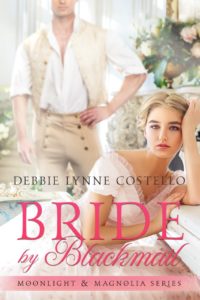 A broken heart, a controlling father, and an intrusive Scot leave Charlotte Jackson reeling. Accused of stealing an heirloom pin, she must choose between an unwanted marriage and the ruin of her family name. With the futures of her three younger sisters at stake, as well as her own reputation, Charlotte must navigate through injustice to find forgiveness and true happiness.

Eager to find the traitor that caused the death of his brother, Duncan Mackenzie comes to America and attempts to fit in with Charleston society. But when the headstrong Charlotte catches his eye, Duncan takes on a second mission—acquiring the lass’s hand. After being spurned several times, he uses unconventional ways of winning her heart.

What I think you should know:
Bride by Blackmail by Debbie Lynn Costello is a historical Christian fiction. It is set in Charleston, South Carolina in 1880. The story is about Charlotte Jackson, a daughter of Charleston and Duncan Mackenize ,a Scottish man who is on a mission for The Crown.

What I think about this book:
Being a South Carolina native I cherish all things Low Country, but because of this I am  critical without meaning to be. I approach each story with hope and anticipation, with this one I was not disappointed. Costello did a wonderful job, I enjoyed the characters and the story. Duncan was a man who was used to his money and his charm getting him what he wanted, Charlotte was a determined woman who was not going to fall for his charms. The two of them definitely made for  interesting interaction, add in the danger and mystery from Duncan’s mission and it was a wonderful story. 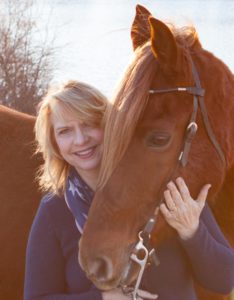 Debbie Lynne Costello has been writing since the young age of eight. She went to college for journalism. She enjoys medieval settings and settings set in nineteenth century Charleston, South Carolina. She loves the Lord and hopes to touch people’s lives through her stories. Debbie Lynne lives in the beautiful state of South Carolina with her husband of 40 years, their 4 children, 2 Tennessee Walking horses, 2 Arabians, miniature donkey, 6 ducks, and 3 dogs.

It is fun to build characters in books and one of the best ways is to show some sort of a hobby or skill that the particular character enjoys. In Bride by Blackmail, Charlotte and her sister, Nellie, are doing needlework on a tablecloth that they hope to have done by the holiday season. My grandmother who would be over a hundred today loved to do needlework. I have pieces from when she was young up until her later years when she did needlework on pillowcases to decorate them up as a Christmas present. But I also have pieces done by my great-great grandmother and her sisters. They are cherished pieces I hope to hand down for generations. As part of my giveaway I’ve purchased antique needlework and embroidered pieces to giveaway with the prizes.

Another fun way to build characters is show something they love to eat. Nellie, who is a minor character, is visiting the hero’s home with her family. Duncan being from Scotland has scones on the breakfast menu. Nellie can’t get enough of the yummy biscuits and finds the servant enjoys helping her continue her indulgence even after she leaves.

2 tsp. sugar (do not put this in with the dry ingredients. This is for topping.)

Mix together dry ingredients in large bowl. Once mixed well, cut hard butter into pats and drop into the bowl. Now cut the butter into the floured mixture until it is more like a crumble. Set aside.

In a small bowl, whisk together your egg and your sour cream until well mixed.

With a fork (no mixer!) blend the liquid mixture into the flour mixture, keep stirring until the mixture becomes one large ball. If you need to you can use your hands toward the end to make sure all the flour is in the ball.

On a lightly floured surface pat the dough out to about 3/4” thick. I try to make mine a rectangle for the next step. Once you have the thickness right, sprinkle with the remaining 2 tsps. sugar. Cut the dough into triangles and place on cookie sheet (you can use parchment paper on the cookie sheet). Be sure to place adequately apart on the sheet to prevent them touching when rising.

Bake approximately 15 minutes or until they are a beautiful golden color.

Allow to cool slightly. These are wonderful warm or cold!

Labor Not in Vain, December 24

A Good Book and Cup of Tea, December 25

For Him and My Family, December 27

To celebrate her tour, Debbie is giving away the grand prize of a a smart watch!!

1 thought on “Bride by Blackmail Review and Giveaway”