Book:  Cooking Up A Mystery 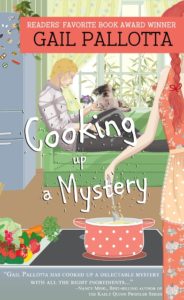 Laney Eskridge worked to put her husband through dental school. Then he left with another woman. She’s on edge from the emotional scars and her parents’ deaths. Then she hears unexplained noises in her new tea house, and her anxiety is tripled. Add a budding romance with Eric—a guy with a fear of commitment—and it’s all too much to handle. She cuts ties with Eric and plunges into making her business pay off.

When Eric discovers that Laney’s in danger, he vows to protect her. But can he make a lasting promise? Will she trust him? . . .and when they overhear a threat that could cause national turmoil, will anyone believe them? There’s more brewing than herbal tea in Cooking up a Mystery.

What I think you should know:
Cooling Up A Mystery by Gail Pollotta is a contemporary Cozy Mystery.  It is set in a small town in Western North Carolina.

What you might need to know:
Laney struggles to understand her worth and value. She has allowed the hurts caused by her ex husband to define who she is and she looks down upon herself and her intelligence.

What I think in this book:
Pollotta has written an engaging story with a mystery that takes time to unfold. Laney and Eric are both trapped by hurts of their past, while I normally prefer the heroine to be stronger, I appreciate how Laney grows throughout the story.  Eric was charmingly bumbling at the start of the story, but as he gained confidence in himself.  I adored many of the side characters of the story including George, Greta  and the Busy Bee Seniors. I enjoyed this story and would like to read more about the town and its eccentric residents.

Award-winning author Gail Pallotta’s a wife, Mom, swimmer and bargain shopper who loves God, beach sunsets and getting together with friends and family. A 2013 Grace Awards finalist, she’s a Reader’s Favorite 2017 Book Award winner and a TopShelf 2020 Book Awards Finalist. She’s published six books, poems, short stories and several hundred articles. Some of her articles appear in anthologies while two are in museums.

In Cooking up a Mystery running a business with no background or formal training in accounting or management overwhelms Laney, the heroine. George, her assistant, tells her she has him and God, who knows her needs. Then he adds, “You … have your mom’s wonderful recipes and you whip them up like a pro.”

I chose the food industry for Laney, a woman entrepreneur succeeding against the odds, because I have lots of cooking experience. I learned the skill at age ten. The reason, according to my father—I’d know how when I got married. I didn’t marry until I was thirty. By then, I’d received lots of instruction, so I knew how to prepare some pretty good dinners. My husband said, “You could start a restaurant.” I wanted to do other things instead, such as write, but I started one in this book.

Mt first woman entrepreneur appears in Hair Calamities and Hot Cash, a romantic comedy about a hairstylist. It’s set in Eve’s Clips, a salon in Triville, a fictitious town in the North Carolina Mountains where Laney opens Laney’s Delectable Delights.

A section in the back of Cooking up a Mystery, Laney’s Chefs in the Making, features over two dozen recipes. Only Laney’s Pineapple Rice is mine. The rest are from a book, Heavenly Delights, authored by my friend, Pam Nichols Griffin, as a fundraiser for Mission Love Seeds, a charity that helps children throughout the world and responds locally after disasters to demonstrate God’s love.

Rice (can be instant, but not boil-in-the-bag)

Cook rice according to directions on the box, but substitute a couple of tablespoons to 1/4 cup pineapple juice (depending on taste) for part of the water.

Coat a heavy bottom skillet with oil. Add the onion, garlic, ginger, pineapple and sugar and stir. Add cold rice, break up, squirt with the juice of one lime and stir until heated and blended.

She Lives To Read, April 11

For Him and My Family, April 13

Reflections From My Bookshelves, April 15

Because I said so — and other adventures in Parenting, April 19

Labor Not in Vain, April 22

To celebrate her tour, Gail is giving away  the grand prize of a $40 Amazon gift card!!

2 thoughts on “Cooking Up a Mystery Review and Giveaway”