Book: Heart Of A Royal 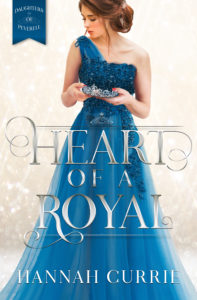 Brought to the palace as a newborn, the royal life bestowed upon Mackenna Sparrow was never meant to last forever. With Princess Alina engaged to be married, Mackenna’s presence as companion is no longer required and, like it or not, she must return to the birthright which should have been hers – that of a commoner. But not everyone at the palace wants her gone. When the truths she’s based her life on start crumbling as fast as her future, will she find the courage to trust, both herself and the prince she’s fallen in love with?

“Having a heart that cared was nothing to apologize for, even if one was a maid.”
Such a surprising and delightful debut novel from Hannah Currie! Yes, the cover is absolutely gorgeous and there is definitely an ethereal romantic element of a country named Peverell ruled by a monarchy and the dazzle and glamour of royalty, but the book is so much more than another sweet YA prince-falls-in-love-with-a-commoner trope. There is a certain layer of politics and intrigue woven into the storyline and the way faith is integrated into the plot and characters is refreshing and fascinating. Kenna’s almost 18 year old voice is fresh, quite mature for a teenager but also peppered with temper tantrums, recognized selfishness, and flighty thoughts to remind us that she is still indeed a teenager. Prince Thoraben is amusing, absolutely adorable, patient and thoughtful. The story is told in Kenna’s first person voice only, which paves way for us to walk in her shoes and feel all the whirlwind of emotions she experiences.
Wow, I could not put this book down. If you enjoy YA novels, you will absolutely love this book. I’d love a sequel (maybe there will be one since the book is subtitled “Daughters of Peverell”….).
I received a copy of the book from WhiteFire Publishing via Celebrate Lit Tours and was under no obligation to post a positive review. All comments and opinions are solely my own. 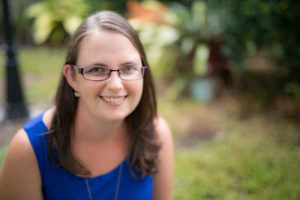 Aussie author, Hannah Currie, loves God, family, people (in small numbers, let’s not go crazy here!) and writing. She and her husband live with their three adorable kids in sunny Queensland, where it really is beautiful one day and perfect the next. Except, maybe, during heatwaves. They’re not so fun. She loves to connect with readers at www.hannahcurrie.com.

For as long as I can remember, I’ve been fascinated by royalty. Real ones like Queen Elizabeth II, who is such an incredible woman and a total hero of mine (not to mention, as a proud Australian and member of the Commonwealth, my monarch) but also the not-so-real ones. Those found in fairytales. Romances. Narnia.

I’m one of those people who blocks out an entire day to watch a royal wedding, sighs like a hopeless romantic through cheesy princess movies, reads just about any novel I find with a crown on the front and loves a full-spread photo souvenir magazine. I may have even written a short story starring a princess for an English assignment at school. More than once. [Side note, if you’re going to write a story about a princess who is totally adorable but can’t spell, don’t use a misspelled word as the title. It takes a lot of explaining to make sure the teacher knows you did it on purpose and doesn’t mark you down for it… sorry Ninth Grade English teacher!].

The glamor draws me in, the beautiful clothes, the history and romance of it all, but it’s the expectations they have on them which hold me there. Every title comes with a million expectations, whether or not they’re realistic. We expect royals, both real and fictional, to behave in a certain way. To be honourable (assuming they’re the good guys). To care for their people and put them first. To always be there. Yes, even to be beautiful.

But what happens when they’re not? When they’re shy? Fight anxiety? Hate the spotlight? Are blemished in some way? What happens when what’s best for the people isn’t what’s best for them? Or when they make a mistake? Something which, for anyone else, would be easily fixed or glossed over but for a royal, gets written into the history books forever. Purely because of their title.

Kenna, the main character in Heart of a Royal, never meant to be a princess. She wasn’t born into royalty, neither did she choose it. And yet, due to circumstances far beyond her control, there she is. Living in a palace. Part of that life.

Very few of us are royalty but I think we all know how heavy expectations can be and the pain of being thrust into situations beyond our control. And yet, even in those moments and seasons, just like Kenna, we have choices. They might seem small, maybe even insignificant in the grand scheme of things, but they’re there. Who we put our trust in. What we do with the circumstances we’ve been given. Where we go from there.

Heart of a Royal is as much my story as it is Kenna’s. No, I’m not a princess (thankfully!) but I have struggled through finding hope and purpose when life flies out of control and the expectations prove too much. And here’s what I’ve found – God is good. There is hope and God is good. I hope, through Kenna’s story, you are reminded of that too.

Reflections From My Bookshelves, November 28

For the Love of Literature, November 29

Through the Fire Blogs, November 29

To Everything There Is A Season, November 30

She Lives To Read, December 2

For Him and My Family, December 6

Adventures of a Travelers Wife, December 7

For The Love of Books, December 9

A Good Book and Cup of Tea, December 10

To celebrate her tour Hannah is giving away the grand prize of a $25 Amazon gift card and a copy of the book!!

3 thoughts on “Heart of a Royal Review & Giveaway”