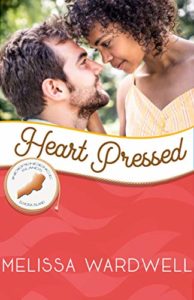 Crushes are great for grapes, wine, and romance—not so great for hearts.

The Sweetheart Festival, an Elnora Island institution, has sparked more than a few romances over the years, but who would have thought it would light a fire in two hearts from two of the island’s oldest families. When Amara Martin and Dante Greco meet, sparks fly that may ignite more than romance.

Seeing the attraction at Amara and Dante’s chance meeting, Beth Stevens and Scott Anderson join forces to do a little matchmaking, not realizing the pressure it would bring to both households and their own hearts. The new couple must decide if they will adhere to tradition or break free from expectations and choose love. Pressure on every side threatens a love that hasn’t yet had a chance to ripen—for both Amara and Dante as well as for Beth and Scott.

Heart Pressed by Melissa Wardlaw is a contemporary Christian Romance. It is the Eighth book in the Independence Island Series and the second book set on Elnora Island.  This book features new characters Amara and Dante, however it also features Beth and Scott who were in Scrumptious Independence. I highly recommend that you read it prior to starting this book even if you haven’t read any other books in the series.

While this book isn’t a “cliffhanger” it does not give resolution to either set of main characters.

Amara loses her mother during the book.

I fell head over heels for Scott and Beth in Scrumptious Independence and was SO excited to get more of their story. Getting to know more of Beth’s relationship with her mother was very heartbreaking, it gave a lot of insight into her character.  I really enjoyed Amara and Dante,both were great characters with compelling back stories. I really enjoyed Wardlaw’s style of writing in the book, it was nice to “drop in” on the characters and see snippets of interaction between the characters and how they are growing, but not be bogged down in the mundane details of the story. I really enjoyed this book and forward to seeing more of both couples in a future book!

Melissa Wardwell resides in Owosso, Michigan with her husband Jonathan, three children, a cat, and two pitbulls. Besides writing, she enjoys reading, having coffee with friends, and spending quality time with her husband kayaking and fishing.  Melissa likes to joke about the voices in her head, but it is those voices have inspired her to write several romance novels such as “I Know the Plans” (a story based in her hometown of Owosso) and “Finding Hope in Savannah”. When she is not penning works of fiction, she is busy reviewing books on her blog, Back Porch Reads. To see more from Melissa Wardwell, visit www.melissawardwell.com

“Life never goes as planned.”
That is the understatement of the century. 2020 has been the perfect example of it. Around the world, plans were made on January 1st to do this or that. Plans to use the year as a spring board for something new, better, or just a change.

Then that virus dashed all those plans. We were shut out from the world with only our books, our televisions, and our families. Some battled the shut down alone, while others had a house full (one friend of mine had eleven people in her house and only one was not her child). I know a couple of single friends who decided to stay at one house for the few weeks that Michigan was closed. Others, like myself, may not have done as well as everyone thought they were. Brave face and all. But we survived. We persevered. We adapted.

“Heart Pressed” is my covid story. It is about the unexpected way life change while you are in the middle of making plans for the future. How some changes are wonderful and rewarding, while others will bring you to the ground, begging for mercy.

Take Amara, for instance. She had a plan and put things into motion to make that plan come to fruition, but God (don’t you love those two words?) had a different plan and took hold of her heart. He softened it, molded it, made it a place where He could reside. Then life came knocking. The one person she thought would be there, couldn’t be, but God (there it is again) gave her someone to count on, hold her hand, and help her through the storms. He showed her that she wasn’t alone in this world by surrounding her with new people who loved her and cared for her.

(Disclaimer – I know God didn’t do anything, but we all have those stories in our own lives where God intervened on our behalf.)

Did you find a way to survive the storm? Did God bring people into your life, even at a distance, that made things better? Did your faith strengthen to new levels? I hope so because life never goes as we plan, but it sure is nice to have someone to hold your hand.

Because I said so — and other adventures in Parenting, March 20

She Lives To Read, March 21

For Him and My Family, March 27

The Meanderings of a Bookworm, March 31