Book: Light in the Mountain Sky 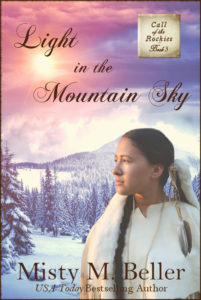 This epic journey may seal her fate forever.

Determined to prove her worth, Meksem fiercely fought to earn her place among the warriors in her Nez Perce camp. When her half-sister is captured by an enemy tribe, she refuses to trust the rescue to anyone else. But her new friends insist on joining her mission, and she battles between relief and frustration at their presence. Especially the white man who peers at her as if he can see through the face of the warrior she struggles so hard to maintain.

Spaniard Adam Vargas thrives on adventure wherever his travels take him. He’s fallen in love with this Rocky Mountain wilderness, as well as the spotted horses the Nez Perce tribe raise. His fascination with this Indian maiden-turned-warrior catches him off guard though, including the way she seems to be fighting for more than her sister’s safe return.

The journey proves more perilous than any of the group expects, and the secret Meksem hides becomes impossible to conceal. If they live through this mission, the life they knew will never be the same again.

From a USA Today bestselling author comes another epic journey through breathless landscapes and intense adventure.

“She could imagine exactly how the spotted gelding felt with Adam by its side. As though it had finally met someone who saw through the bluster to the fear and mistakes underneath, and looked past even those to the true being at the core.”

In this third book of the Call of the Rockies series, we get to know Adam, Joel’s older brother, better. He’s brave, loyal, and steadfast but always has had a heart for adventure. His love and gentleness with horses is pretty amazing to see, This book can be read as a stand-alone but reading the books in order will give depth and fuller meaning to the characters and relationships as they continue to build throughout the series. Meksem is a fierce warrior who has never felt understood or fully loved since the death of her father. Now she’s on the hunt to find a rivaling tribe’s war party that kidnapped her half-sister and others from their tribe. There is the author’s trademark description of wintery mountainous Clearwater River Valley in 1831 that is breath-taking, traveling perils through snow and wilderness that is gasp-inducing, and the call to salvation and redemption that is clear and well-laid out. The constant war between the Blackfoot tribe and the Nez Perce and Salish tribes is a different theme that runs within the main plot and shows the sinful nature of all mankind. But God’s love and sacrifice that transcends our sin is reflected in Meksem’s thoughts, struggles, and understanding that dawns.

I received a copy of the book through the author/publisher via Celebrate Lit Tours and was under no obligation to post a positive review. All comments and opinions are solely my own. 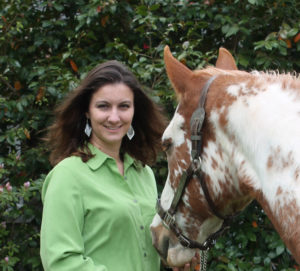 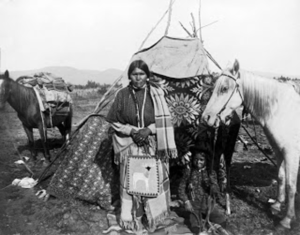 As I’ve been researching for my current Call of the Rockies series, I’ve had the pleasure of diving deep into the culture of the Nez Perce tribe. I found it interesting that one of the primary food sources of The People (as they called themselves) was camas roots.

But what really drew my notice was how the women would cultivate entire fields of camas root, store what they needed for their family through the winter, then use the extras for bartering. Some savvy women would become quite wealthy from their business dealings! 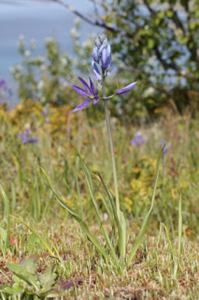 The bulbs of the camas plant are full of calories and nutrients, and each fall, Nez Perce families would travel to their particular camas meadow (a section of land whose camas rights had probably been passed down from generation to generation within their family). Many of these meadows were located near present-day Weippe, Moscow or Grangeville, where the onion-shaped bulbs grew thickly.

Women used pointed wooden tools to harvest the bulbs, and could often gather over 50 pounds a day, satisfying their full winter’s supply within just a few days.

Native American peoples who ate camas include the Nez Perce (Nimíipuu), Cree, Coast Salish, Kalapuya, and Blackfoot, and Yakama, among many others. Not all of these people groups harvested camas themselves. Instead, many relied on trade in order to procure it. Trade networks were established all the way from the Rockies to the Pacific Ocean, and a shrewd businesswoman who tended her camas meadows well could provide everything her family needed and more!

Through the Fire Blogs, October 13

For the Love of Literature, October 16

Adventures of a Travelers Wife, October 18

For Him and My Family, October 20

She Lives To Read, October 21

Writing from the Heart Land, October 21

To celebrate her tour, Misty is giving away the grand prize of a $50 Amazon gift card!!

2 thoughts on “Light in the Mountain Sky Review and Giveaway”