MindWar by Andrew Klavan is a 336 page novel in the Young Adult Science Fiction genre. It is published by Thomas Nelson Publishers and was released on March 17, 2015.  To purchase your copy, click here. 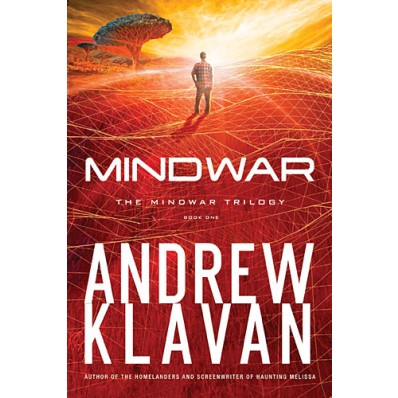 Rick nodded with grim satisfaction. He laid the game controller aside on the sofa and reached for his crutches.

Rick Dial was the best quarterback Putnam Hills High School had ever seen. Unflappable. Unstoppable. Number 12. But when a car accident left him crippled, Rick’s life as he knew it ended. He disavowed his triumphant past. He ignored his girlfriend. He disappeared into his bedroom—and into the glowing video screen.

But Rick’s uncanny gaming skills have attracted attention. Dangerous attention. Government agents have uncovered a potentially devastating cyber-threat: a Russian genius has created a digital reality called the Realm, from which he can enter, control, and disrupt American computer systems . . . from transportation to defense. The agents want Rick, quick-thinking quarterback and gaming master, to enter the Realm and stop the madman—before he sends America into chaos.

Entering the Realm will give Rick what he thought he’d never have again: a body as strong and fast as it was before the accident. But this is no game, there are no extra lives, and what happens to Rick in the Realm happens to Rick’s body in reality.

Even after Rick agrees to help, he can’t shake the sense that he’s being kept in the dark. Why would a government agency act so aggressively? Can anyone inside the Realm be trusted? How many others have entered before him . . . and failed to return?

In the tradition of Ender’s Game and The Matrix, MindWar is a complex thriller about a seemingly ordinary teenager who discovers a hidden gift—a gift that could make him a hero . . . or cost him everything.

MindWar focused on themes of family, faith, and hope. I thoroughly enjoyed watching the characters in this novel evolve as the plot unfolded. The main character, Rick, shows reader how important it is to never give up, though he had to learn this lesson the hard way. Despite the danger it brought to his own life, he did tried with all his might to save those he calls friends.

The focus shift between the good guys and the bad guys made the storyline easier to follow. Although this book started off slowly, it picked up towards the end of the novel.  Overall, this book had an interesting concept and was a good read.

I give this book 3 out of 5 stars.  I give it this rating only because it took some time for the story to pick up. This book had great characters that can teach us important lessons.

Andrew Klavan is a bestselling, award-winning thriller novelist whose books have been made into major motion pictures. He broke into the YA scene with the best-selling Homelanders series, starting with The Last Thing I Remember. He is also a screenwriter and scripted the innovative movie-in-an-app Haunting Melissa.