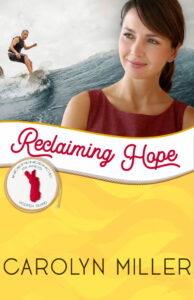 Callie Steele might be a bit… focused on work, but despite what her employers say, she enjoys her well-ordered, productive life.

When she’s sent to meet the owners of an estate requiring post-hurricane landscaping, Callie meets their son, Kai Brody, a super-chilled pro surfer, who is as opposite from her as they come. Though initially smitten, Callie knows a relationship with Kai is a bad idea—a very bad idea.

Kai, however, can’t help but be intrigued by someone who challenges him to make something of his life again. He’s determined to pursue her, if she’ll give him half a chance.

The more time they spend together, negotiating the challenges of work, illness, and family, the more their opposing outlooks clash and connect. What do these unlikely friends really want from life?  Is it best to focus on work or recreation?

As Kai and Callie answers from the Lord, they also must consider if such complete opposites have enough in common to make a relationship last.

Reclaiming Hope is a contemporary Christian Romance by Carolyn Miller is the eighteenth  book in the Independence Island Series and the sixth book set on Hooper.  This book features several characters from previous books and does give spoilers for those characters, however it can be read as a standalone. This book features Callie who has been in several previous books

I really enjoyed this book, it may be one of my favorites from the series so far. Callie was a character that I was intrigued about after reading about her in previous books so it was neat to get to look further into her character.  Kai was a very interesting new character,  it was interesting to see how his new found faith influenced the decisions that he made. I enjoyed the friendship that developed between the two. The problems that they faced were very realistic and made me root for them even more.  This was a wonderful story of opposites attract.  I can’t wait to see the characters again in another book. 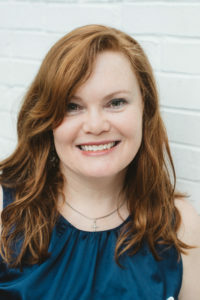 Carolyn Miller is an Australian author of inspirational romance, particularly that of the Regency era, and loves drawing readers into fictional worlds where flawed people can grow in faith, hope and love through stories that show the truth of God’s grace in our lives.

For Reclaiming Hope, my next book in the Independence Islands series, I was thrilled to finally turn the spotlight onto Callie Steele, whose sassy attitude and words of wisdom in earlier books have made a mark on the other employees at Greener Gardens – and has already endeared her to readers who have been begging to read Callie’s story.

Callie needed a special someone who could help this hyper-organized checklist-loving woman see that there is more to life than meeting a deadline. Enter Kai Brody, a super-chilled and laidback surfer whose enviable travels around the world broaden Callie’s horizons, and watch sparks fly. I consider Reclaiming Hope to be one of my most humorous books yet, as these two trade banter as opposites who attract – but can they last?

And yet Reclaiming Hope isn’t merely froth and sea-foam, bigger questions concerning family, identity and whether God’s plans can be considered good when people are forced to live with the consequences of poor choices. I really enjoy writing fiction like this, fiction that is grounded in truth, with realistic, flawed characters who are on God journeys to find faith, freedom, and hope.

I’m so glad people are really enjoying my new contemporary books, where I can bring my love of gardens (& my horticulturalist hubby’s expertise!) to a new audience. Check out my website www.carolynmillerauthor.com to see what’s growing in my garden here in my corner of Australia.

If you enjoy stories of hope, heart and humor, then you’ll be sure to enjoy this novel about a workaholic and the broken surfer as together they find renewed hope for their hearts.

For Him and My Family, January 24

Because I said so — and other adventures in Parenting, January 30

She Lives To Read, February 1

To celebrate her tour, Carolyn is giving away the grand prize package of a $25 Amazon gift card and a copy of the book!!