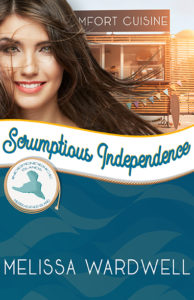 “Taste and see that the Lord is good.”

And so is Beth’s cooking! It’s a good thing, too. After a lifetime of her family’s smothering embrace, a whole new world opens to her with the passing of her beloved grandmother.

Armed with an inheritance she never expected and orders on how to use it, Beth sets off for Merriweather Island and fulfillment of a lifetime of dreams.

Or so she hopes.

What she didn’t hope for was what most women would—a man who fills her thoughts at the most wonderfully unwelcome times. She doesn’t have time or space for a relationship, but how do you tell love to just go away?

Of course, starting over in a new place is never easy, especially as an outsider in a small community. Add to that a mayor who has her dander up and a woman bound to make her life miserable, is it any wonder that Beth begins to doubt God’s and Gram’s plans?

With her heart betraying her resolve and challenges to her faith, Beth finds it takes bravery she didn’t know she had to discover just how scrumptious independence can be.

This “Merriweather book” is the second in a new series featuring five islands, six authors, and a boatload of happily-ever-afters.

Scrumptious Independence by Melissa Wardlaw is the second book in the Independence Island series.  This book follows Dual Power of Convenience and the introductory book Christmas on Breaker’s Point and features some of the same characters. While it could be read as a standalone I recommend reading the previous books and getting to know the islands and their quirky residents as they add an extra layer of enjoyment to the series. This book features Beth, who inherits her Gram’s cottage on Merriweather and brings a food truck to the islands.

What I thought about this book:
This was such a fun read, with characters that are realistic and easy to relate to. Beth grew up visiting her grandparents every summer,  making friends and memories that stuck with her. I love how she is willing to step away from her life and give herself a chance to grow. This was a good story of her growing and realizing her worth.  I love the details that Wardlaw put into the story, talking about the foods and most of all the Bronco.  Scott was the guy that girls dream of, a guy who even after years apart respects you and is willing to wait for you. I love how realistically their friendship grew. I couldn’t get enough of this story and am really looking forward to the rest of the books in the series.

Besides writing, she enjoys reading, having coffee with friends, and spending quality time with her husband kayaking and fishing.

Melissa likes to joke about the voices in her head, but it is those voices have inspired her to write several romance novels such as “I Know the Plans” (a story based in her hometown of Owosso) and “Finding Hope in Savannah”. When she is not penning works of fiction, she is busy reviewing books on her blog, Back Porch Reads.

“Lord, I don’t know how I can keep doing this.”

That was my prayer one evening in 2019 as I made my way to praise practice. I knew that writing was something God had called me to (because He never seems to call you to do something you enjoy) but the finances were just not there to publish another book. I felt lost in the uncertainty of the path moving forward and I needed a light. I had just shared all my concerns with my parents and left with my dad’s words ringing in my head. Are you writing to gain notoriety or are you writing for God?

The next morning, CelebrateLit had a post looking for submissions for a new and innovative series. Hope burst within me and I know I needed more information. I followed instructions and spoke with Sandy Barela and Chautona Havig. The more I was told, the more excited I became because I knew I needed to be part of this collection.

Ideas were hatched, characters began to talk, and a book proposal was sent. I continued to work on the development of characters and the mobile business knowing in my heart that God had given me this opportunity. I wouldn’t do things halfway. And when the confirmation email came, I was ready to share the beautiful story and characters that developed.

Beth is a food truck proprietor, so that means she spends most of her time cooking. In an effort to grow her recipes, I have been making videos of me cooking some of our family’s favorites as well as raiding my mom’s recipe box. The result is some amazing food to share.

Every book, pre-order card, and my YouTube channel has recipes on it. And so will this tour.

With it being summertime, our family doesn’t want those heavy meals so sometimes chips and sandwiches are all we need in the evenings. One favorite is my chicken salad.

Feeds 4 (unless you have big eaters.) 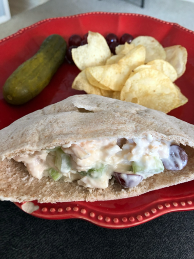 Mix everything together and serve on your favorite bread option or on a bed of lettuce. I like mine in a pita pocket or on lettuce. This time it was with a pita pocket with a side of lightly salted chips and a pickle.

Now, just a little side note, you can add what ever veggie or fruit you like. Apples and cucumbers would be a great addition as well. So, don’t feel like you have to do things exactly like I do. Make it your own.

For Him and My Family, September 23

She Lives To Read, September 24

Adventures of a Travelers Wife, September 24

Because I said so — and other adventures in Parenting, September 25

The Meaderings of a Bookworm, October 2