The King’s Highway by Caryl McAdoo is a 218 page novel in the dystopian genre. It is indie published and was released on Sept 26, 2015.  To purchase your copy, click here. 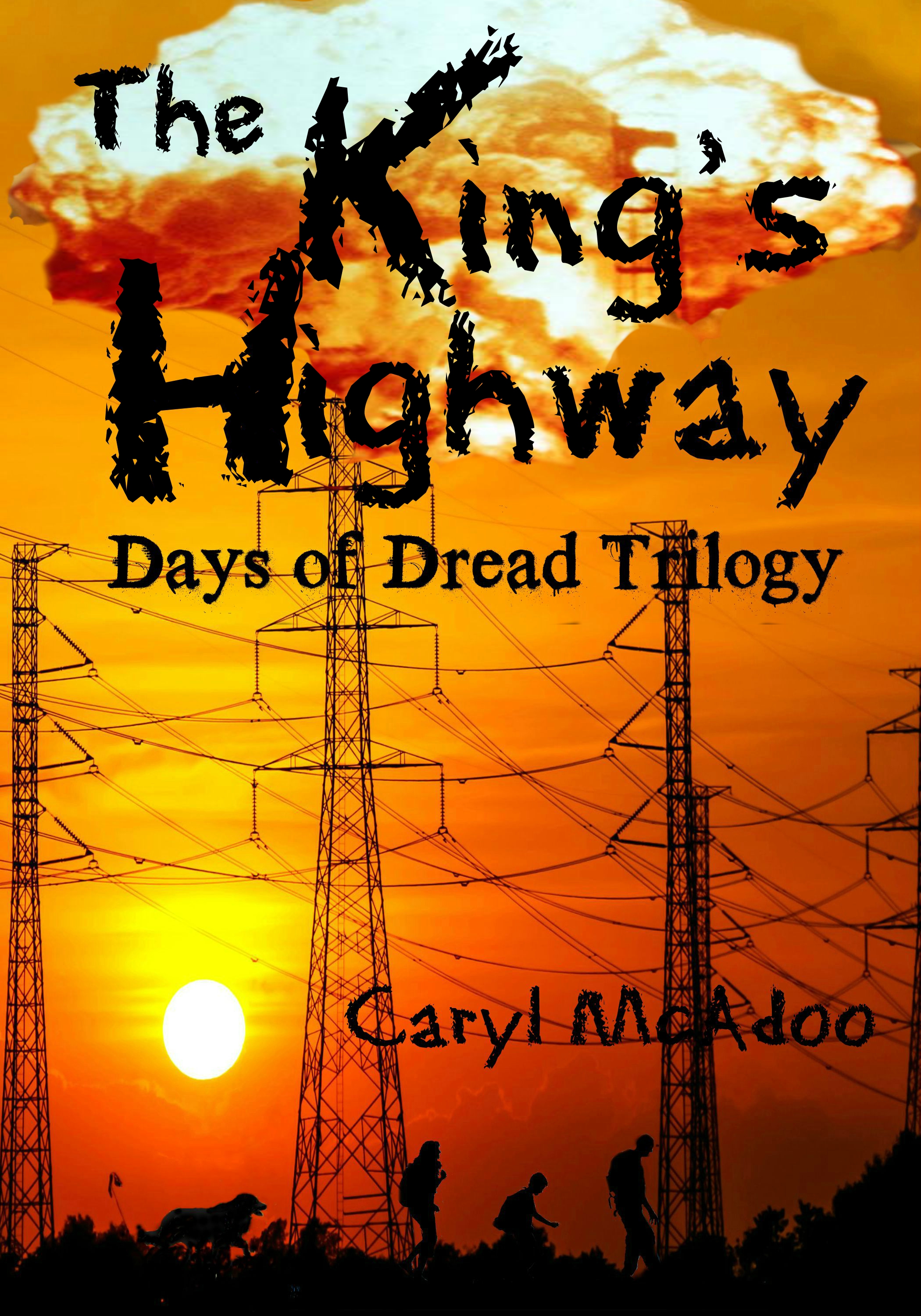 A mysterious dead man directs the small band on their journey to a much safer corridor he dubs The King’s Highway.

Airplanes are falling out of the sky, and all things electric rendered useless after a mysterious flash. It tests the grit of fifteen-year-old Jackson Allison when the care and safety of his younger siblings fall solely to him. No one knows for sure what’s happened, but danger lurks if they stay. With a fierce determination to keep his thirteen-year-old sister McKenzie and nine-year-old brother Cooper safe, the high school freshman is compelled to leave their Irving home in the shadow of the DFW Airport for their grandparents’ farm a hundred-plus miles northeast.

Thrust into a lawless, chaotic world, he’s guided by an ever-changing cryptic note that leads his growing troupe along the King’s Highway. Bullies, Russians, wild animals, gang-bangers, and kidnappers thwart their progress while a lack of drinkable water and food is a constant concern. Will he ever get his people to safety in the Red River Valley in far Northeast Texas?

Award winning author brings her new Christian mid-grade release, book one in the  Days of Dread Trilogy THE KING’S HIGHWAY. The prolific, bestselling novelist loves singing new songs the Lord gives her and painting. In 2008, her high school sweetheart-husband Ron moved her to the woods of Red River County. Caryl counts four children and sixteen grandsugars life’s biggest blessings believing all good things come from God. Praying her story gives God glory, she hopes each one ministers His love, mercy, and grace to its readers. She and Ron live in Clarksville, Texas with two grandsons, Christian and Benjamen.

This book was intended to be towards the YA audience, however, I think people of any age can enjoy this book. I loved Boggs the dog. He was such an addition to the book.  Caryl wrote from his POV at times and I enjoyed reading his thoughts.  McKenzie is another character I liked.  She stuck to her guns and would not wobble in her beliefs. We can learn a lot for her.

The story was full of events that kept it moving.  I wanted to know what happens to the group. It was hard to put down.

I give this book 4 out of 5 stars.  If you like dystopian fiction, you will love The King’s Highway!

For years, Sarah Price has entertained her readers with her Amish romance novels. Now, she shares her knowledge about how the Amish and Mennonites celebrate the holidays based on her first-hand experiences with her Amish friends as well as growing up with Mennonite family.

This book contains stories, hymns, decorating tips, and (of course) recipes so that her readers can also delight in having a plain and simple holiday, just like the Amish and Mennonites.

It is always fun and interesting to learn about the holiday traditions of others.  Sarah’s first-hand knowledge of the Amish and Mennonites makes Plain & Simple Traditions special because the reader can trust its truthfulness. This book contains pictures and stories of Sarah’s family which makes you feel like you are a part of it! As the reader, you feel as if you have a window into her family. With both recipes and decorating ideas, this will be a book you cherish and come back to for future holiday celebrations. My family has immensely enjoyed the recipes Sarah has shared. Waiting for another holiday to eat them again is not an option for them!

Whether you are looking to learn more about the Amish & Mennonite traditions, wanting to add to your own traditions, craving some new dishes to try or yearning to know more about Sarah Price herself, you will not be disappointed with this book!

Plain & Simple Traditions is 170 page non-fiction book written by Sarah Price and published by Price Publishing, LLC.  It was released on December 15, 2014. It can be purchased through Amazon for $2.99 for the e-book and $13.49 for paperback.

Sarah’s family settled in Pennsylvania when the first wave of Mennonites emigrated from Europe in 1705.  She divides her time between her home outside of New York City and an Amish farm in Lancaster County, Pennsylvania, where she writes and reconnects with her Amish friends and Mennonite family.  To learn more about Sarah, visit her website at sarahpriceauthor.wordpress.com or on Facebook at www.facebook.com/fansofsarahprice.

There is nothing better than staying home on a rainy day.  I love curling up on the couch with a good book in my hand and a fire on in the fireplace.  Add a good cup of coffee and that makes life is grand! It has been raining this weekend in CA so I have cozied up with a new book with a Christmas theme.  I am hoping to post a book review soon. Readers, what do you like to do on a rainy day? Is there a new book you have picked up lately? Wishing you the best of weeks! God bless, Sandra