All along the eastern seaboard, the American struggle for independence rages. In the British-held southern port of Mobile, Alabama, the conflict brewing is quieter–though no less deadly. The lovely Frenchwoman Lyse Lanier is best friends with the daughter of the British commander. Rafael Gonzalez is a charming young Spanish merchant with a secret mission and a shipment of gold to support General Washington. As their paths cross and their destinies become increasingly tangled, Lyse and Rafael must decide where their true loyalties lie–and somehow keep Lyse’s family from being executed as traitors to the British Crown. 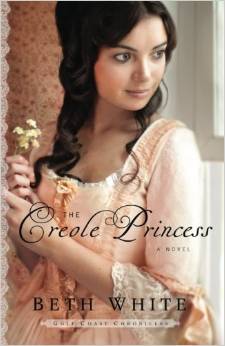 The Creole Princess is a fast-paced novel that keeps you on your toes. It is very apparent that White did a lot of research on both the history of the time period as well as the setting in which the novel takes place; this shines through in her writing.  There are several cultures represented throughout The Creole Princess and the nuances added to her characters from each culture make them very authentic. Added to all of this, the history represented is not very well known so you learn something new.

There are many solid characters in The Creole Princess; some you love and some you hate. They come to life and give you a small glimpse of what it would have been like to live during this time period. White excels at creating tension through her characters and their situations which makes it hard to put her book down.  You can not wait to see what happens next. The main protagonist, Lyse, illuminates love, grace and forgiveness.  She makes you want to be a better daughter, sibling, wife, and friend.

I give this book 5 out of 5 stars.  It will definitely be one I will read again!

Beth White is the award-winning author of The Pelican Bride. A native Mississippian, she teaches music at an inner-city high school in historic Mobile, Alabama. Her novels have won the American Christian Fiction Writers’ Carol Award, the RT Book Club Reviewers’ Choice Award, and the Inspirational Reader’s Choice Award. Learn more at www.bethwhite.net.

Thank you to Revell and Beth White for a free copy of The Creole Princess in exchange for my honest review. No monetary compensation was received for my opinions expressed in this review.