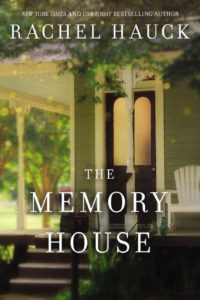 Embracing the future means remembering the past . . . When Beck Holiday lost her father in the North Tower on 9/11, she also lost her memories of him. Eighteen years later, she’s a tough New York City cop burdened with a damaging secret, suspended for misconduct, and struggling to get her life in order. Meanwhile a mysterious letter arrives informing her she’s inherited a house along Florida’s northern coast, and what she discovers there will change her life forever. Matters of the heart only become more complicated when she runs into handsome Bruno Endicott, a driven sports agent who fondly recalls the connection they shared as teenagers. But Beck doesn’t remember that, either. Decades earlier, widow Everleigh Applegate lives a steady, uneventful life with her widowed mother after a tornado ripped through Waco, Texas, and destroyed her new, young married life. When she runs into old high school friend Don Callahan, she begins to yearn for change. Yet no matter how much she longs to love again, she is hindered by a secret she can never share. Fifty years separate the women but through the power of love and miracle of faith, they each find healing in a beautiful Victorian known affectionately as The Memory House.

“You are not a has-been. You are a not-yet. Or a you’ve-not-seen-me-yet. But do not let your mistakes, which you’ve paid for dearly, define you. Let them refine you.”

Rachel Hauck is one of my all-time favorite contemporary romance and dual time-line authors for so many reasons and this book just proves that her writing gets better with each book (how DOES she do that?!). The characters in her book are so real, tangible, broken and lovable. The dual time-line works well to bring a story of remembrance, finding true self, forgiveness, healing, and faith with intricate details that fit together perfectly. Reading this book was like settling down with an old friend I haven’t seen in a while – equally comfortable, excited, and expectant – and catching up on the ups and downs of life with honesty and vulnerability and letting her story touch my heart, encourage my soul, and uplift my spirit. This book is a must-read!

Beck and Bruno share the present-day timeline as Beck yearns to find herself while being plunged into the great unknown and uncertainty of her future. Bruno holds many shared memories that Beck has forgotten and their childhood friendship begins anew even as he struggles with his own past and sense of failure. Everleigh and Don share their 1960s timeline as Everleigh hides herself in widowhood and Don tries to coax her out into the world of the living. Both the couples’ stories converge in a house on Memory Lane where Everleigh and Don lived out their married years and Beck happens to inherit when Everleigh dies. All four characters have guilt, shame, and regrets that drag them down but learn to rise above them and become the new creations God has promised.

I know Rachel Hauck hasn’t written a series for some time now, but I would love to see follow up books with some of the minor characters in this book – particularly Tyvis!!

I received a copy of the book from Thomas Nelson via Celebrate Lit Tours and was under no obligation to post a positive review. All comments and opinions are solely my own. 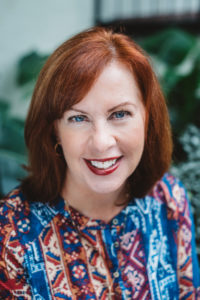 Rachel Hauck is the New York Times, Wall Street Journal, and USA TODAY bestselling author of The Wedding Dress, which was also named Inspirational Novel of the Year by Romantic Times and was a RITA finalist. Rachel lives in central Florida with her husband and pet and writes from her ivory tower. Visit her online at RachelHauck.com; Facebook: RachelHauck; Twitter: @RachelHauck; Instagram: @rachelhauc

Excerpt from The Memory House 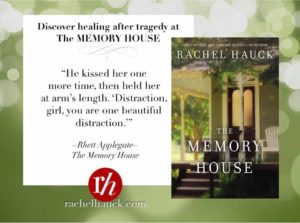 When Mama Applegate spoke as if Everleigh were a guest rather than a family member, she embraced it with grace. Because at the end of the day, she was Rhett’s wife. She alone shared his dreams, his heart, his life.

And at night, when she couldn’t sleep, his soft breathing was her lullaby.

“Listen, mister, I have to get back to work or I won’t make it home in time for our dinner.” She tugged at his shirt collar. “So are you going to tell me why you’re here?”

“I was going to wait until tonight, but I got so excited . . .” Rhett stepped over to the desk in front of Everleigh’s and retrieved a long white canister. “Here. Open it. I feel like a kid at Christmas.”

“Rhett, what have you done?” She pried away the cap and slipped out a set of drawings.

“Here, let me.” Rhett unrolled a rendering of a cozy house with a wraparound porch nestled between two cottonwoods. “Our house, Ev. I took those sketches you made after we were married and gave

them to the architect. What do you think?”

“Th-this is our house?” She wrapped her arms around his waist, leaning against his thick arm as she studied the drawing.

Everleigh studied the drawing. It was just like she imagined. “Are you sure?” She gazed up at her husband. “I didn’t think we’d saved enough money.”

“We’ve saved every penny of your salary, and I finally sold the stud bull to Jacob Marshall. He’s been after me for a year . . .” Rhett held her with one hand while flipping through the drawing with the other. “I bought the ten acres by the stream. You know, the one with the trees we loved. Dad wanted to give it to us, but I said no strings.

I wanted to buy it so he can’t hold it over me. Not that he would, but family business can get tricky.” Everleigh leaned to see the name of the road. Memory Lane.

“Darling, the section right off Memory Lane? The spot I wanted?”

Rhett’s grandmother had named the dirt road years ago, when she imagined a large family with lots of grandkids running around.

She envisioned an Applegate community.

But her sons, Melvin and Earl, went to war. Only Earl—nicknamed Spike—returned home the fall of 1918. He inherited the ranch, married Mama Applegate, and fathered Rhett, an only child. Grandma’s two daughters married and moved away.

“Your granny would be proud, darling,” Everleigh said. “We’re beginning her dream.”

“Sh-she would.” Rhett cleared his throat, pressing his fist over his cough. “So, w-what do you think?”

Tell him! The timing could not have been more perfect.

He jerked his wrist up, checking his watch. “Oh, Ev, sorry, darling, but I promised Dad I’d pick him up from the hardware store thirty minutes ago.” He gave her a quick, passing kiss. “I’d planned to show you these tonight, but I just couldn’t wait.” He rolled up the drawings and tucked them into the canister. “What is it you wanted to say?” On reflex, he checked his watch again.

“Nothing,” she said, smiling. “I’ll see you later. We can talk then. I have work to do anyway.”

Everleigh fell into him and pressed her cheek against his chest.

He kissed her one more time, then held her at arm’s length.

“Distraction, girl, you are one beautiful distraction.”

The Power of Words, April 23

Spoken from the Heart, April 24

For Him and My Family, April 25

For The Love of Books, April 29

Reflections From My Bookshelves, May 1

Lights in a Dark World, May 1

Truth and Grace Homeschool Academy, May 1

Stories By Gina, May 2

Living Life Free in christ, May 3

The Becca Files, May 4

Inspired by fiction, May 5

To Everything A Season, May 5

To celebrate her tour, Rachel is giving away a grand prize of a copy of The Memory House!!

Be sure to comment on the blog stops for nine extra entries into the giveaway! Click the link below to enter. https://promosimple.com/ps/e2aa/the-memory-house-celebration-tour-giveaway