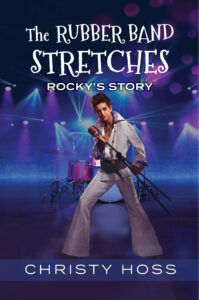 When his ex-con father Eduardo, sneaks into his life demanding attention, Rocky’s best friend and lead guitar for the band, Eddie, comes to his rescue. Eddie involves the entire band in Rocky’s protection to be “secret service” and comedic chaos erupts.

After the Rubber Band performs its first set at the mayor’s 50th birthday party, Rocky mysteriously disappears. The band realizes it’s no longer about fun and games. Friends and family are what matter most in life. The bond of the band demands that secrets be revealed.

Will friends, foster or blood family win the battle for Rocky’s future?

“I’m sure she’s filling them full of,” I stop short of trouble. “You know what.”

As the guys get up to play basketball, I decide to take a walk and listen to my music. Along the way, I’ll browse past Becca and her groupies to eavesdrop or stop her from telling more tales. Halfway to the tetherball, a man comes out of nowhere, holding Sunday’s newspaper.

“Are you Roadkill?” The man points to my picture.

I take one earphone out. “Who’s asking?”

I take the other earphone out. “Do I know you?”

Before the man can answer, yard duty is at my side.

“Sir, have you checked in at the office?” I don’t know her name, but from the look on her face, I don’t want to mess with this yard duty. Her radio chirps and a voice speaks in what sounds like a secret code. “Thank you.”

I notice Principal Haymaker walking quickly to meet us.

“Sir, I’m going to have to ask you to leave, immediately.”

My stomach feels like I may lose what is left of my breakfast. I don’t move, except to breathe. What is happening?

You can purchase your copy here!

Christy caught the writing bug in second grade after winning a prize for a five-page story about her dog, Noodles. Mrs. Olson told her she was destined to be a writer and that dream never left her thoughts. After teaching elementary school for fifteen years, Christy fulfilled her childhood dream with her debut novel, The Rubber Band. She substitute teaches to support her writing career, deriving writing inspiration from the students and situations she encounters.

At age twenty-five, she was diagnosed with type-one diabetes but refuses to let it limit her. Her diabetic alert dog, Aiden, has saved her life uncountable times and will appear in future installments of The Rubber Band. Christy lives by this equation:

Christy is a freelance editor and writes children’s Bible stories for Focus on the Family ClubHouse magazine and has written articles for Guideposts. She is a featured speaker for conferences, retreats and special events.

Christy lives in Northern California with Kevin, the love of her life. They have three grown children.